GET MY FIRST BOOK FOR FREE!

The Vanderhoof Conspiracy is a story about a woman, a man, their hired hand, and some arsenic. Based on a true event, this book will have you wondering what secret you have that will follow you long after you are dead!  Go to: tammywalls.com to get your FREE copy of this book or you can order it online at Amazon.

Lamech, a fifth generation of Cain’s dependents, (if I have counted correctly) follows the same pattern of ungodliness as Cain did.  There is so much to discover about Lamech that the six verses he is mentioned in the Bible almost make him seem like a “passover reading”, so to speak. But his fifteen minutes of fame have a lot to show us.

Genesis chapter 4 verse 19 begins with the phrase, “Lamech married two women…”. Okay, let’s start there because it caused me to wonder when did the marrying of multiple women come into existence?  It wasn’t as though one of his wives had died and the other was the second wife – verse 23 disputes that fact.  So it is stated as if the marrying of more than one woman had been a practice for a while because the writer of Genesis never comments on it other than to say “Lamech married two women” – sort of nonchalantly.   So logically,  somewhere between Cain “laying with his wife (singular)” in verse 17 and Lamech being married to two women in verse 19, life on the earth had changed quite drastically from God’s original plan of one man and one woman, as in Adam and Eve.  Now this “marrying of more than one woman” might not have been the practice every where on earth at the time, but it was certainly the practice in the Cainite civilization and the city of Enoch, which Cain had built.

And so we see that Lamech called his wives together in verse 23 and explains to them that he, like his ancestor Cain, is also a murderer.  He states, “I have killed a man for wounding me, a young man for injuring me.”  The Bible doesn’t tell us what type of “wound” it was.  Maybe it was a territorial argument and a physical fight.  Maybe it was a financial wound in that the “young man” stole a piece of property owned by Lamech, like a sheep or something.  The two important things here are that the man was “young” and Lamech had a foul temper – a temper so foul that instead of dealing with a situation as an adult, he resorted to murder and hatred for another human being – very similar to Cain.  And was the young man a teenager?  The writer made special note that it was a young man not an adult man.  Was the penalty for killing a “young man” different during those times?  I don’t know.

It is also important to make you aware that he told his wives about it.  Doesn’t it make you wonder why?  Men during those days did not value a woman’s opinion, nor were women treated like anything other than property and baby machines.  So isn’t it curious that he tells his wives about his crime? It is almost as if he is running or hiding in a way, like, “Quick come here, I have to tell you this before anyone else shows up or finds out.”  Was he expecting his wives to cover for him in some way?  Was he going to run away and he needed to tell them before he left?  We can only wonder.

But it is his arrogance in the next verse, verse 24, that I find incredible.  He states, “If Cain is avenged seven times, then Lamech seventy-seven times.”  So first off, we are aware that God had placed a mark on Cain after Cain had killed Abel and God was sending him away so that if anyone attempted to kill Cain, then they would suffer vengeance seven times over – a vengeance decreed from Almighty God.  But at this point in the Bible when Lamech makes his statement, we are unaware of anyone who attempted to harm Cain, and furthermore, the knowledge of this “vengeance” had been passed down through multiple generations because Lamech knew of it.  Maybe the noticeable mark on Cain was a physical marking that somehow set him apart from the others and so when people talked about why Cain was different it became known what he had done to his brother Abel and the vengeance decreed against anyone who tried to “avenge” Abel’s blood.   Again, we do not know.  All we know is that Lamech knows about the vengeance if anyone were to harm Cain because Lamech mentions it in his statement to his wives. 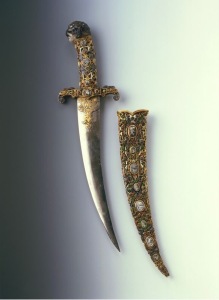 But here Lamech thinks that his own sin of murder isn’t possibly as bad as Cain’s and therefore he (Lamech) should have more vengeance if someone tries to harm him because of his sin.  Basically, he is saying, “Listen my wives.  While it is true I did something bad, it wasn’t nearly as bad as what Cain did.  I was JUSTIFIED because that man injured me, whereas Cain killed Abel when Abel did nothing to him to deserve it.  The man I killed deserved it.”  Doesn’t it amaze you how he tries to justify his sin of murder and make himself out to be the victim in the situation? And doesn’t it amaze you how he feels that he is worthy to pass judgement on anyone who tries to harm him because of his sin?

It is of further curiosity to see how the writer of Genesis leaves the story there.  He mentions it and then nothing further is noted.  Why even mention it?  It had to have some importance if it were to be mentioned and included in the Bible.  I think the lessons here are to show us that civilization had continued to degrade into a downward sinful spiral.  That only five generations removed from the first-born child of Adam and Eve,  man had continued to disregard God and HIS laws.  It also shows us that man had no reverence for God in that man thought he could place himself into the righteous seat of God and invoke a binding punishment on his fellow man.

We never hear from Lamech again, nor do we know what happened to him.  I do know this, however.  Lamech eventually died, whether by the hands of another or by natural causes.  Lamech’s sin will be judged and he will be held to account by the only One who can pronounce judgement – God – and this God sees all and saw the truth to what Lamech had done – just as He does with us.