GET MY FIRST BOOK!

The Vanderhoof Conspiracy is a story about a woman, a man, their hired hand, and some arsenic. Based on a true event, this book will have you wondering what secret you have that will follow you long after you are dead!  Order it online at Amazon.

Fear is an interesting thing, isn’t it?  For some people it is a non-sensible irrational type of emotion, while for others it is a real and paralyzing prison.  I never completely understood the full aspects of fear until July 2017.  It is interesting to me how the mind can take an event and pile it onto another event and then another until one day an event becomes the proverbial straw that broke the camel’s back.

As a child growing up in a home with a less than functional normalcy, there were many many things that I encountered that no child should have to endur, yet I seemed to grow up and get passed them, or so my conscious mind wanted me to think.  But in the background, my unconscious mind was keeping track.  And then in 2017, things were going to change for me, and the emotion of fear would become a dark presence that would grip me in a way I hadn’t ever thought.  And even though I am a Christian and knew all the “proper” verses to quote during my troubled times, my mind, body, and soul seemed to have a disconnect to which I still have not fully recovered.

In early 2017 I had a pretty serious surgery and within days of being released from the hospital found myself in the emergency room with complications.  Before I knew it, a nurse was injecting several things into my IV, one of which made me feel as if I couldn’t breathe.  When I began telling her this, she seemed to almost discredit my concern and my chest continued to tighten and my legs started to jerk, among other things, and at one point I thought I was going to die on the table there in the emergency room.  I found myself unable to say anything audibly but repeated over and over in my head, “The Lord is My Shepherd, The Lord is My Shepherd, The Lord is My Shepherd.”  This was all I could think of for the period of time in which I thought I was going to meet my Maker.  I said it over and over for 30 minutes.  But believe it or not this situation was not my proverbial straw, but it was close and it was soon to follow.

The final straw came just a few months later as I watched my mother die, one fateful July day, in the Intensive Care.  It had been a horrible illness for her that had lasted years.  And while I knew she was going to die, I never expected what I witnessed.  As the breathing machine was taken off of her, prior to her death, she suddenly sat up and grasped my sister in desperation because she couldn’t breathe.  It was her final voiceless plea for help and comfort.  Then followed her collapsing backward and turning blue.  I did not know it at the time, but fear entered me.  Paralyzing fear.  A fear of death.  A fear of death that is irrational, especially for a Christian who believes that she will be immediately transported to Heaven upon death.

So I had sought counseling and still the fear is gripping.  It has my mind in shackles.  I cannot even take an ibuprofen without a fear that I will have a bad reaction (courtesy of the emergency room nurse!).  If I take that pill, I will begin to sweat and feel like I can’t breathe.  I have to mentally talk myself out of the physical situation I find myself in.  I have anxiety over the smallest things.  Irrational anxiety.  It doesn’t help that I work in a nursing home and am around death all day long reminding me of and feeding that fear.

So why is it I can not simply join the throngs of Christians who are “looking forward” to death because they will be with Christ?  Why do I not have joy over that comfort? I continue to ask myself this question.  Am I weak minded?  Am I really a non-believer in Christ’s promises?  Well this morning, I felt an overwhelming burden to pray and simply ask God for help.  And as always, God is faithful.  My mind went to Christ when he knew he was about to be arrested and face the ultimate – death.  He didn’t walk up to the soldiers haughtily and say, “Go ahead, do what you will.  I will be with God soon….you can kill the body but not the soul….yadda yadda yadda….”. He didn’t smile as he walked past the people in the streets watching him carry his cross.  He didn’t shout for glee when they nailed his hands and feet to the cross.  And if anyone knew about eternity it was him for goodness sake!!!!  He was God in human flesh, and that there is the key….he was in human flesh.  Flesh that feels pain.  Flesh that has emotion.

Jesus was in the garden praying prior to his death.  What was he saying?  “God if it 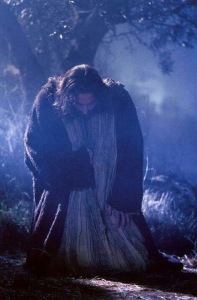 be your will, take this cup from me! But not my will, but your will be done.”  Christ knowing the suffering he was about to endure asked God to take it from him, YET, stated at the end, but even though I am asking in my humanness, I want your will, your desire, your purpose to be accomplished.  So if Christ was praying and dreading what he was about to go thru, why would I be any different?  My soul knows the God of the Universe, but it does not know what it is like to be in eternity with God – Christ did.  So fear grips me, yes….I still have not completely overcome the mental trauma I went thru, but I know one thing……I am following in Christ’s footsteps…..my humanness does not want to suffer and die and that creates a fear in me….but my spirit says it is God’s will to take my life whenever he desires and I know He will be there on the other side.

I find the Bible and the words written therein can give us direction and comfort in any issue we are having in life.  I think this is why I recited, The Lord is My Shepherd so many times…He really is the Good Shepherd watching over his sheep and caring for them even in the darkest of times.